Coddle is a Dublin tradition that no one in the rest of the country seems to know about, unless they’ve been enlightened by a possibly shocked and confused Dub. I only discovered it when I moved to Dublin myself (met a boy, as the story goes) and when I tried to find a “true” recipe to make it myself (oh, young love!) I found lots of passionate arguments about what’s allowed or not allowed in the pot and have it be still considered coddle. As it’s such a mystery to so many people, I want to give it a long post.

Ultimately, coddle is a pig-based white stew. Chickens, historically, were too valuable as egg producers to be eaten outside of special occasions, save for the odd old boiler. Beef was usually just too expensive apart from the ‘umbles; traditional Irish stew is lamb, or more correctly, mutton-based. It’s near-impossible to find mutton these days, but that’s another post.

The traditional, “pure” recipe uses sausages, bacon pieces, carrots, onion, potatoes, pepper and water. It has become acceptable to use back bacon rashers  instead of pieces, but I really dislike this personally – too much fat, too much faffing with a spoon trying to break them up, and let’s be honest, they look disgusting in it.  Stock is usually used instead of plain water, though I know a lot of people use a packet of leek and potato soup powder. Again, I don’t like this. Far too salty, and tastes like soup with weird bits in it that don’t belong.

Straddling the line of acceptability was barley (again, I’m not a fan, even in Irish stew) and red lentils (which are a bit of a strange addition, but essentially dissolve completely, and thicken the soup, and add nutritious filler). I almost felt sorry for the person who added both lentils and a can of chopped tomatoes, as an entire message board thread called out this abomination as being not-coddle.

Clockwise from bottom left are sausages (12 high meat content, with fine, natural casing), cured ham pieces ( about two handfuls. Usually from butcher offcuts. I’ve been known to chop up a small fillet of ham if the pieces on offer were too fatty or stringy looking), carrots (four big ones this time), one medium onion (never more for me. It’s largely for flavour) and I’ll add about four big potatoes later, so they dont completely break down over the long cooking time. I cut everything into chunks that can be eaten with a spoon, and without trying to break it up in the bowl.

I add a couple of non-traditional bay leaves and a clove of chopped (not minced) garlic, and some thyme and black pepper as well. Chicken stock works best for the liquid component. I stir some Worcestershire sauce into the stock to up the umami factor. It’s often added to the completed stew as a condiment, so not totally cheating. I also add a teaspoon of very unorthodox tomato puree. It can’t be tasted, but it brings out the sweetness in the carrots and meat. Give the pot a good stir and apply heat. I use a slow cooker, for about six hours. Stove top, over a low heat and partially covered works too. I’ve never done it in the oven, but I imagine 160 degrees for most of a day would be perfect.

So another offal-ly good (hur hur hur) addition to coddle are kidneys. This being a piggy dish, I assume that originally it would be pigs kidney. My preference is for lambs, as they’re small, sweet and not too overpowering in flavour or texture. As kidneys can be a bit of alien territory, I want to focus on them here.

One kidney, in the suet.

Step one with kidneys is to ignore anything shrink wrapped or vaccuum packed. They’re not something that you want to eat unless they’re super fresh, and attempts to extend their shelf life should be viewed with deep suspicion.

Getting them in suet does mean extra work in the kitchen, but I recommend it for two big reasons. First, the fat protects the kidney, keeping it intact and free of bruises as far as possible. The second, and more important reason, is freshness.

On a perfectly fresh kidney, the fat is firm and waxy, and creamy white, and firmly attached. There should be no soft spots or yellowing, or any gamey smell at all.

Once you peel the fat away with your fingers, the membranes should be elastic, and the kidney should be evenly coloured and plump. Catch the membrane with point of a knife and carefully pull away towards the centre. They can break quite easily, though this isn’t a massive issue for this dish.

De-membraned kidney on the left. Hand on top, run your knife perpendicular to you board and slice down the middle from the curved outside edge to the central core. A little knife work will remove the core, seen in the bottom of the centre above, along with the little sinewy bits, leaving you with something approaching the half on the right.

If, and this is very important, there’s the smell of ammonia, or a strong, unpleasant odour, then take the kidney and chuck it in your outside bin – it’s either stale or the animal wasn’t processed efficiently. Either way, don’t eat it.

If your kidneys are all cored, chop each half in two, and rinse well in lots of cold water. 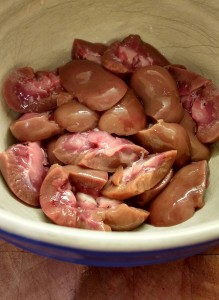 This is six of them, ready for the pot. Just pour in, stir, and stick the lid back on.

I tend to stick the suet in a deep roasting dish and put into a medium oven for an hour or so to render. I’ll pour the liquid off into a jam jar, and when it’s cool it goes in the fridge for future roast potatoes, and discard anything left.

I make my coddle a day ahead, taking the whole slow cooker liner and stashing it in the bottom of the fridge. It’s much better after a night to itself, and reheats beautifully – just steer clear of the microwave unless you want exploded sausage and kidney bits to clean up. Adjust seasoning as you reheat. The saltiness of the meat can vary wildly, and can also mellow out a lot as it rests in the fridge.

If you want to get fancy, chop some curly parsley and sprinkle over before serving. Good with bread – either brown soda or crusty white, smeared with plenty of Kerrygold butter.

Again, not the most photogenic,  but that’s peasant food for you. Something slightly fancier next time, honest.

One thought on “My Dublin Coddle”