While I’m firmly in the “no thanks” camp with the whole new year resolution business, largely to avoid whole depravation/self-flagellation cycle, I’m a big fan of new projects and new adventures. This will be both I hope. Travelling without moving, and all that.

Despite multiple (often far more gut-wrenching than they should have been) destashes of my cook book shelves, fuelled by several house moves, I still find myself with the better part of a hundred cook books. Most of my early favourites have been passed on to other homes as my confidence in the kitchen improved, and produced more and more delicious results. I’ve got some fabulous everyday volumes and some big and imposing ones. Everything from vegan ice cream (actually delicious!) to 1970s housewives friends, and even a few of the historic and historical.

While they’re largely all well thumbed through, and all occupy a competitive spot on the shelf, there are more than a few that have so far just been inspiration and I’ve yet to actually cook anything from them. Other books, I cook the same half dozen recipes from over and over, but never venture further.

My challenge to myself this year is to cook my books. Hopefully I’ll discover some new favourite, learn a lot, and generally have fun as I go!

My only rule is that I want to average one completely new recipe a week. I can revisit old favourites, but the whole point of this is to do new things. I’ll blog as I go, largely as a reference to myself (Did I really like that? What substitutions did I make?  Was that largely a hot mess in hindsight?). If anyone else wants to cast an eye over, or drop a comment, then the more the merrier!

Tonight though, our local Japanese restaurant that delivers is having a New Years special, and they’ve also delivered too much sushi (I didn’t think such a thing exists either!) so for this evening I’ll be eating far too much and being thankful for baggy pajamas 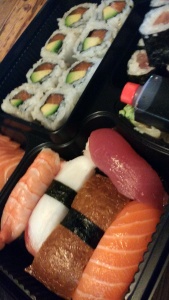